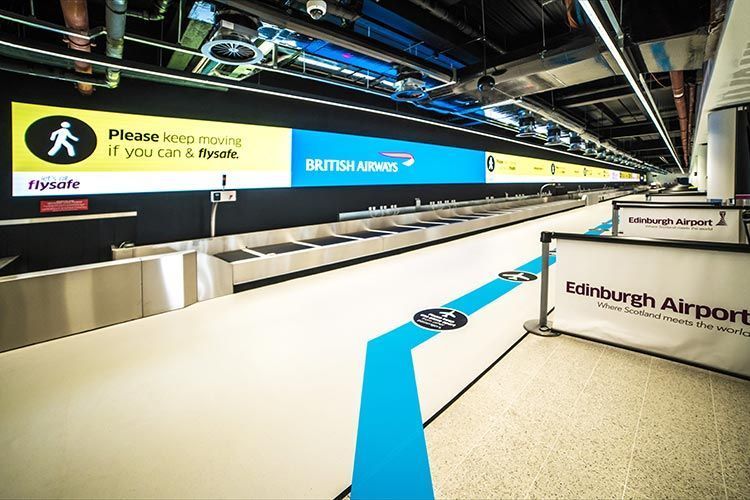 The teams behind the ambitious project wanted to create a flexible display solution to fulfil the needs of the travellers throughout the airport, whether that be for wayfinding or flight information. Integrator nuVIDEO worked extensively with distributor Midwich and PSCo to find a solution that could fulfil the requirements for millions of travellers.

“One of the critical considerations in the design of the new check-in facility was to ensure that flight information, wayfinding and emergency information systems would enable passengers to quickly and safely navigate their route through the check-in hall. This was particularly important given the introduction of multiple new self-service check in systems,” said Michael Macneil, Sales Manager nuVIDEO.

EAL’s initial brief, created with a CGI visualisation, outlined the concept of 59 x 65 inch landscape displays, fitted to the full length of the baggage carousel and positioned so they are visible to all passengers in the hall.

“The initial brief was centred around LCD technology and direct PC input to each monitor. This would have been functional, but it was clear LED would be a more suitable platform,” said Graham Pow, head of sales, PSCo.

The merits of LED were demonstrated to the project’s stakeholders with a mock-up at Innovation House – Midwich Group’s southern showroom and warehousing facility in Bracknell, back in August 2019. 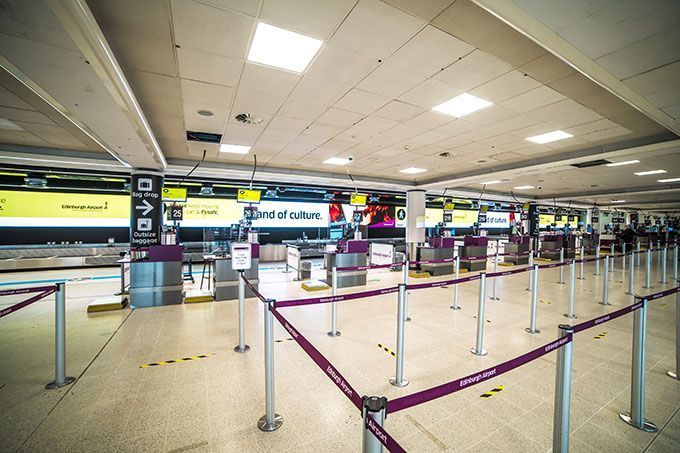 “It was all about identifying the right technical tool and vendor technology for the project and using the in-house technical expertise at Innovation House to produce a digital signage and image processing solution to sit behind the LED wall,” said Manesh Mistry, high-end display and videowall processing sales specialist, Midwich.

“We then demonstrated the potential return on investment leveraging the flexibility of LED could achieve, using the space not only for way finding and flight information, but also for marketing - an avenue they had not considered,” Macneil added.

Integrator nuVIDEO worked closely with the airport’s commercial team to examine how the LED asset could be used as both an information focussed and promotional display while still offering longevity and low maintenance.

With LED now as the chosen asset, the brief developed from individual monitors to a seamless, LED canvas with flexibility on how, when and where content was displayed. The LED wall also developed into a far more modernised, spectacular view for those entering the terminal, something for passengers to remember for years to come.

When it came to choosing which LED solution could fulfil all of these requirements, as well as occupy the space above the baggage carousel with the limited ceiling height, the team chose Absen. The A27 2.5mm LED panels from Absen’s Acclaim series suited the job perfectly.

The Acclaim series has been designed with a fast paced, busy environment in mind. With its high brightness, colour uniformity and flexible configuration, the Acclaim series is sure to stand out from the crowd and draw the attention of the millions of passengers as they pass through the airport. With Absen’s CrystalView Technology, the Acclaim series can maintain complete detail and high contrast ratio and achieve high greyscale even at low brightness levels, thanks to use of a premium chip in the installation. It’s easily installed and maintained, as it has been designed with the magnetic front service tool which easily removes modules from the frame.

Throughout the installation, there were logistical and physical demands on the team. Every item included in the build had to be brought in manually via the airport screen systems, while staff passed through security to access or leave the site. The team opted to do the work in stages, with each part of the installation split into work phases and equipment stored offsite until needed. 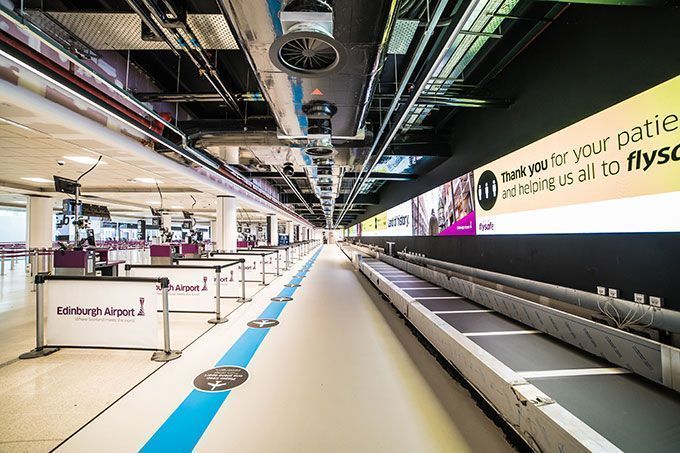 “The videowall was being mounted on to a preconstructed plywood wall, immediately above a baggage carousel which was being constructed and tested throughout the installation. This required meticulous planning and co-ordination with a number of other trades and contractors throughout,” said Macneil. “As the wall itself was over 85m it was almost impossible for the building contractor to keep it dead straight which presented considerable challenges when attempting to align every frame and LED panel.”

A total of 140 prefabricated frames, provided by PSCo, were mounted on to the surface of the wall and aligned end to end, with each vertical frame consisting of four Absen cabinets, slotted into the frames and interconnected. The canvas comprised 560 Absen A2725 Plus cabinets, amounting to 2,240 LED panels.

“Edinburgh Airport is a standout project that clearly demonstrates the benefits of LED. With 118 sqm of digital real estate, the Absen LED wall delivers a flexible and highly impactful visual solution in an environment that sees consistently high footfall with extended dwell times. The A27 panels from Absen’s Acclaim series is our flagship LED solution for fixed installations offering outstanding image quality and a seamless display with front install and service”, said Alex Couzins, head of brand and marketing, Absen Europe.

The redevelopment project’s success lies in its ability to harness the power of technology to help achieve the airport’s vision of creating a multi-airline self-bag drop facility that enhances the airport experience for passengers by reducing bag drop times, informing customers of new check in processes and providing pertinent information regarding their journey.

This has been particularly crucial in enabling Edinburgh Airport to operate safely throughout the coronavirus pandemic, engaging with customers on a scale previously not possible, to deliver clear and concise information on new procedures and local restrictions.

Adam Wilson, operations director, EAL, concluded: “The installation creates a striking visual for all passengers entering the check-in hall. In practical terms, we can clearly display where certain flights and airlines are checking in and show key passenger communications such as security information. The flexibility of the wall means we can also use it for video to showcase destinations we fly to, Scotland or our retail offering.”