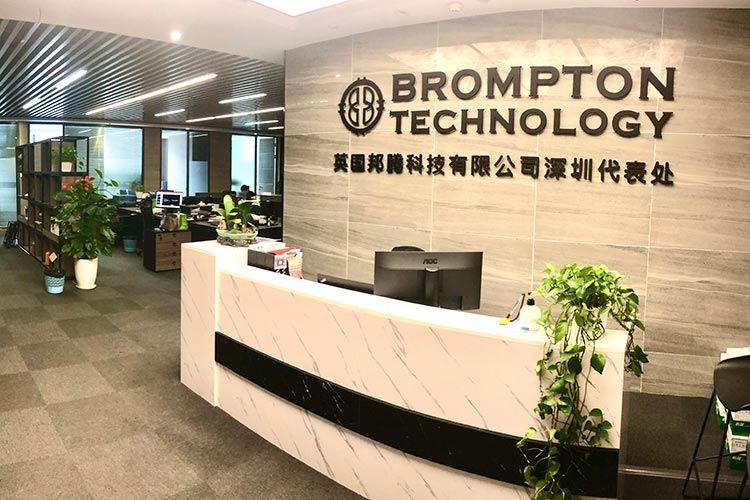 Brompton Technology has expanded its operation in China.

The company has moved to larger offices and hiring three new members of staff to further support its customers in the territory.

The expansion follows the development of Brompton’s highly acclaimed HDR technology and the successful roll out of its new Hydra measurement system, which unlocks the power of Dynamic Calibration, the enabling technology for Brompton HDR.

The new office is adjacent to Brompton’s previous facility in High Tech Industrial Park, Nanshan, in the modern metropolis of Shenzhen, Guangdong Province. This facility is double the size, allowing space to calibrate and test prototype panels on site. New Calibration Support Engineers, Alex Guo and John Lee, both have an extensive understanding of the LED screen industry and are ideally placed to assist Brompton customers in China with Dynamic Calibration. Helping to run the office is new Office Assistant, Noora Xu, who has valuable experience in international trade and purchasing and takes over the role from Summer Zhang.

“The decision to increase both our office space and staff was made pre lockdown,” says Elijah Ebo, Brompton’s General Manager (Asia). “The incredible interest in Brompton HDR and panel recalibration, following its launch at the end of last year, had meant we were getting busier and busier, so we needed additional calibration specialists. They are very hard to find. We had to search for the right people and were very lucky to find them.”

Whilst the intervening months have been understandably quiet, Brompton’s China team has used the time constructively, with Guo and Lee now fully trained on Hydra, and Xu fully immersed in Brompton’s processes.

The proactive approach from both existing and new team members meant that, once the Hydra cameras were available, Gou and Lee already had an in-depth knowledge of the system. Meanwhile Summer Zhang, thanks to her professional development during her time with Brompton, has been promoted to the role of Project Manager.